"LET ME WIN, BUT IF I CANNOT WIN, LET ME BE BRAVE IN THE ATTEMPT"

OMGAA is the only community based “main-stream” youth sports organization in Minnesota to include adapted sports.  Though it began as softball, the program has grown to include participation in other Special Olympic sports.

Please continue to watch this page for upcoming registration information, program highlights and summer events as we celebrate our 20th season of play. 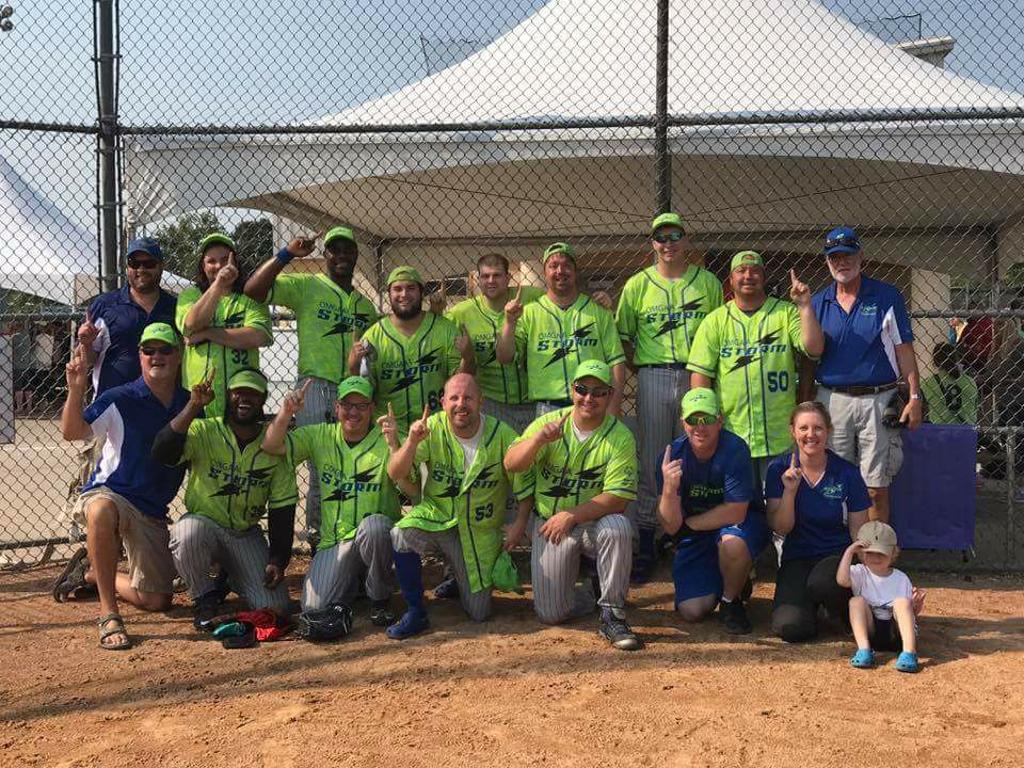 A Brief History of the OMGAA Adapted Sports Programs

Established in 2003, the OMGAA Adapted Sports Program, offers summer softball to special needs athletes.  OMGAA has been and continues to be the only “main-stream” community-based youth sports program to include adapted / Special Olympics programs under its umbrella.  Because this program competes against other communities at a regional and state level, it was designated as a “Traveling” program and provided a modified version of the OMGAA Storm Traveling uniform.

First State Tournament in 2003 – only team to wear uniforms.  OMGAA took 2nd place in state our first year of play.

At the 2004 State Tournament- one of five teams in uniforms.

In 2006, after winning the state tournament, OMGAA Adapted Sports was recognized by Special Olympics MN (SOMN) as a model of achievement and community cooperation, held out for other organizations to emulate, and in 2008 OMGAA was selected to host the Special Olympics MN State Tournament.  By then every team (over 30 delegations in all) were in uniforms.   OMGAA won that State Championship.  OMGAA was selected to host and won again in 2009.

Our program began with 15 athletes playing softball.  We expect to have 70 athletes this year playing on 5 softball teams of various ability levels.

From its modest beginnings, the Adapted Sports program has evolved into one of the largest Adapted Sports/Special Olympics delegations in Minnesota, with over 200 athletes competing in basketball, flag football, snowboarding, poly-hockey and softball.  The program now functions like as an independent subsidiary of OMGAA, funding most of the sports without OMGAA assistance.  However, we continue to provide 100% of the logistic and financial support for the softball program, and we continue to identify these programs as a part of OMGAA.

Since the beginning, OMGAA Adapted athletes have represented Minnesota on several national championship teams, and the United States in Worldwide Special Olympics.   In 2006 Team MN won the National SO Championship with 16 of 20 athletes being from OMGAA.  In 2015, the OMGAA SO Basketball won the national tournament in Wichita, Kansas, and received an automatic entry and seeding to the 2016 Tournament in Roanoke Valley, Virginia.

Athletes come primarily from Osseo and Maple Grove School District, but also from other the northwest metro Communities. We ask for a modest registration fee, but no potential team member is turned away. The only requirement is that athletes have a documented cognitive disability (athletes with only physical disabilities compete in the separate Paralympics.) Special Olympics athletes range in age from 7 years old and up, with many athletes well into their 20s. Teams are organized by ability, and not by age, and a majority of the teams are co-ed.

The impact of this program and the rewards of watching these athletes perform when given a first-class chance to compete are beyond expression.